short review of The Goldfinch by Donna Tartt

Now that the movie is a flop I might as well publish this overly detailed review of the book I did some time ago.

Tartt’s novel begins with Theodore Decker, a thirteen year old New Yorker, visiting a downtown museum with this mother. Lingering on the first floor alone Theo meets an enchanting girl just moments before a terrorist attack takes the life of his mother is killed in a terrorist attack. When Theo wakes up he is in shock, lying in the dusty ruins of the museum with a dying old man who turns out to be the girl’s guardian. The man gives him an old ring and tells him to take it to an address on the Lower East Side, and shortly afterwards dies. Still in shock, Theo rescues his mother’s favorite painting, Fabritius’ The Goldfinch, stashing it in his backpack and beginning a lifelong attachment to great art.

Later, when he finds the address the old man gave him, Theo meets the man’s partner, Hobie, who befriends Theo and treats him as an equal in mourning for a lost loved one. Unexpectedly Theo is reunited with the museum girl, Pippa, whom he met but didn’t speak to at the museum on that fatal day. The story takes on an aura of love mysticism from this point, and one day in the hospital Pippa kisses him after sucking on a morphine lollipop, literally making herself intoxicating to him. Tartt’s Theo attempts to reconstruct the presence of his lost mother in various ways—both Pippa and the Fabritius painting are his connection to a maternal “absence” he can’t quite fill up. 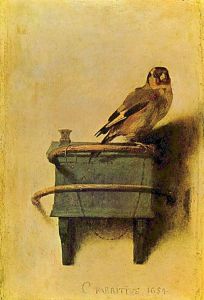 A fatal family greed tears the two apart, even though they are so naturally drawn to one another, and we get to a major shift that is one of the few inconsistencies of the book: although Theo is clearly in love with Pippa, he seems to utterly forget about her after she departs for Texas to live with her aunt and he is taken to live in Las Vegas with his estranged father. There is no further recollection of Pippa for the next hundred or so pages, and we are left to assume that Theo has either become very unsentimental or he copes with the loss of Pippa so well because he has already overcome the loss of his mother(?). When Theo meets his best friend, Boris, a Polish-Ukrainian émigré whose father is a cosmopolitan miner, the atmosphere of the novel abruptly shifts to the other side of American culture. As the boys soon discover, the subdivision they live in is a deserted suburban wasteland on the outskirts of Las Vegas, and their shared sense of abandonment seems to weld them together for life. It is in this section that we encounter some really brilliant, unusual dialogue that makes it easy to discern that Tartt, author of another adolescent-focused novel, The Secret History, enjoyed writing this part the most.

It would be unfair to compare Tartt’s novel to Extremely Loud and Very Close, and even though the plot of the marginally upper class young New Yorker who must overcome the loss of a parent due to terrorism by discovering his roots is far too similar, I wish to avoid insulting her work. It’s not a question of Tartt’s book being superior (even though it is), the trauma narrative is not a mystery to be “solved”, but a beginning that takes Theo out of the city and puts him in the middle of the Nevada desert in his father’s enormous, vacant home. There he meets his best friend, Boris, and his life truly begins.

I liked this book a lot more than I thought I would. Tartt’s style is atmospheric but leaves hollow spaces in you after you read it, places that you really want to be filled up with pieces of Theo’s life. The novel is not entirely without problems though, I think. At the end, when Boris sees to it that the painting is returned and earns the reward from the museum for leading to the location of the painting, returning to Theo in his Amsterdam hotel room on Christmas morning, it is not clear why. Boris explains that he has discovered something about fate and the mystery of unintended consequences, but then….[spoiler]? The problem is that although Boris is likable in many ways, he sometimes seems a bit too one-dimensional and all too often the stereotypical Slavic émigré. It also seems implausible that Theo hasn’t opened the painting since he left Las Vegas, and hasn’t discovered Boris’s hated Civics textbook in lieu of the painting.

Despite these minor problems, the book is a page-turner that brilliantly evokes the wonder and amazement of youth, a novel that eschews experimentalism in favor of in-in-the-gut storytelling. It is most definitely worth reading at least once.

As near as I can recall this was written in a blur shortly after I read the book, in 2014.