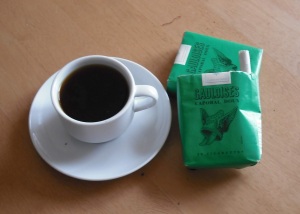 Yes, could I quit just one considering I seem to have wired both together in my brain? Not because of the PTA movie by that name surely, but probably because we once indulged in these vices simultaneously…As a kid, coffee just meant my grandma’s percolated brew, a dark scalding hot liquid she’d consume in her own unique style, first pouring it from the cup into the saucer and back into the cup while drinking it very fast as it cooled in this way. Despite the way it invigorated that dear old octogenarian lady, percolated coffee never really appealed to me, and it wasn’t until college that I became a serious caffeine and nicotine addict.

Dave, my college roommate, and I had a large pot of Mr. Coffee on most of the time and sometimes drank 5 pots a day, smoking constantly and discussing the latestX-Files episode or getting high on left-handed cigarettes and listening to Bach (because D. owned the stereo). This drop coffee taught me that it’s really only the first cup or two of the day that tastes good, after that it’s just poor man’s cocaine.

Later, during my first Taiwan stint, studying Mandarin at NCCU, coffee meant siphon-made coffee from a little café my classmates and I went to after our Chinese lessons let out. It was a soulless kind of place inside a supermarket, but, along with my Korean and Japanese friends, I actually learned Chinese there, chain-smoking and drinking Mandheling ‘vacuum coffee’.

Afterwards, in grad school, things became very intense, and cigs and coffee meant a productive day at Adriana’s, the café that served my shots-in-the-dark, while I smoked one Merit after another, while I corrected one essay after another trying not to listen to the philosophy students jabbering on about Heidegger at the next table. 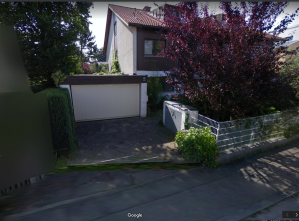 After that, in Munich, coffee was Segafredo cafés in the u-bahn, a powerful lungo or espresso served with one of those Lotus cookies that are just big enough to make you hungry, and a glass of water. Cigs on hand were usually blue Gauloises blondes because the American brands were owned by Japan Tobacco and didn’t taste nearly as good…They also meant standing in the night cold on a Kobaldstrasse sidewalk, puffing away while watching the snow come down.

After going back to the US and then coming here, to Taiwan, I reverted to American drip coffee and Marlboros, former being easiest to acquire in this land of tea-drinkers and latter because you can only find American and Japanese brands (thanks Taiwan Cigarette and Alcohol Monopoly). However, in 2006 (or ’07) I went to Vietnam, where the coffee is both stunningly strong and stunningly sweet — like, you can “stand a spoon up in it” as my grandmother would have said.

These days I smoke less and have an espresso machine at home, but what really has changed? I’m nearly 50 for one thing, but not sure where I was going with this highly unhealthy post, just another rabbit hole of memory I guess; toxic nostalgia…