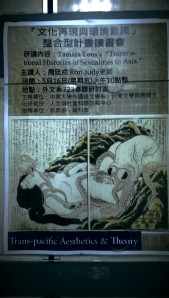 2) Sets up a distinction between ‘transnational’ and ‘postcolonial’ histories—the latter focus on heterosexual, male-female relations, and favor “East-West” relations instead of inter-Asian relations.

3) Idea that “gender plays a more salient role in Asian sexual eroticism”—by this I think she means male/transgendered/female sexuality was more important than it was in the “West”? (gender eroticism, as opposed to?) (She also privileges East/West dyad).

4) Race and sex managed “through the regulation of sex along gendered lines” (again—why the emphasis on gendered?). Ban on white women in Asia meant establishment of ‘institutionalized’ interracial sexual relations.

5) Ann Stoler—distinguished professor of anthropology at The New School for Social Research. Pioneer in the study of colonial sexuality and mixed race populations. SEXUALITY because of eugenics movement; Victorian repression as a misnomer—identity formed by sexuality; idea of sex only for marriage;

6) Sexuality vs. the erotic—sex’s emphasis on genital sex—and the performance of gender roles in Asia before the colonies; imposition of hetero-normative sexual order by imperialists.

7) Somehow Foucault’s ideas don’t fit the gendered erotics of Asia—I disagree!—and Butler’s Foucauldian ideas of performative gender identity would seem to be at play in her conception of Asian sexuality.

9) Futures—study of “sexual subjectivities” which would address the “dissonance” of Foucault’s work for Asia. (Contra the idea that sexuality reflects deepest inner self and not some form of exercise/therapeutic behavior).